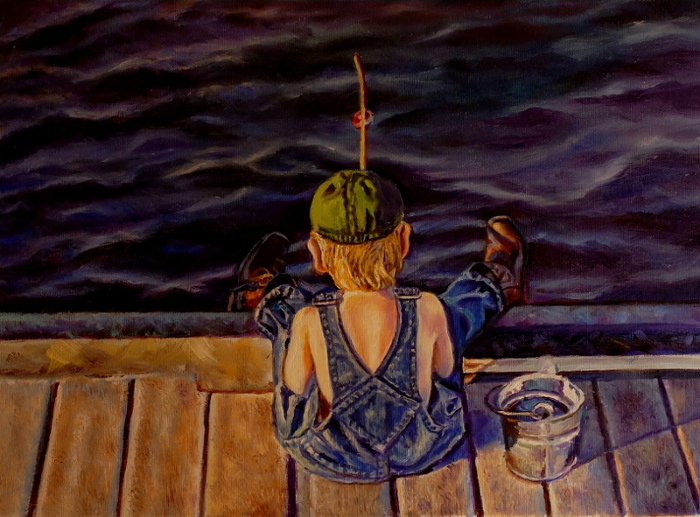 When I saw the reference photo by Lorri Lang on Pixabay, I just knew I needed to paint it! The scene reminded so much of the simpler times of childhood, and although this was not a memory of something I ever experienced myself, I think with that everything our children have these days, being either automated or electronic… seeing a child spending a lazy summer day with just a fishing pole & a pail is something to be treasured.

I felt that the original photograph had a very dramatic look to it, due to the fact that it was quite a bit darker and the colors were a lot less saturated…and that worked very well as a photo. As a painting, I felt that it needed a brighter, more colorful palette, so instead of the camouflage-patterned hat he had on, I decided to have him wearing a plain green baseball cap…which to me added to the ‘simple things’ theme I was trying to portray. I very much enjoyed exploring all the colors I ‘saw’ in the boards of the wooden pier, including the yellow that was in the highlights, and the blues and aqua tones found in the shadows…as well as all the different hues that appear in the metal pail which he had set nearby, for his future catch.