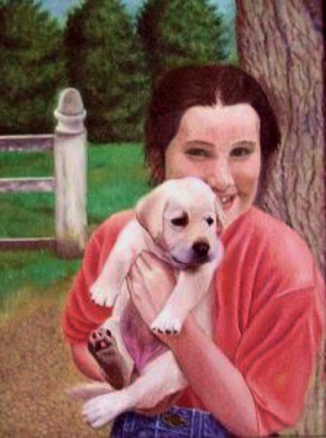 This artist oil painting composition  “A New Puppy For Becca”…

is one I did of a family member & her soon to be best friend at the time…”Keisha”.   Several things in the original photograph were changed,  in order for me to enhance and make it work better as a painting.  Her T-shirt was modified from it’s original white that had a small print, to the more colorful and flattering coral.  I achieved this color by mixing two different pigments together… (i.e. “Cadmium Red – ‘light’ with small amounts of ‘”Lemon-Yellow” & “Titanium White”).  These pigments were also mixed to different degrees of saturation… (for the lighter and darker values); adding more or less “Titanium White” in order to be able to achieve the various ‘values’ … (or ‘hues’);  found in her shirt.  These different levels of saturation were blended together once they were applied to the canvas, to create the folds in the material, using the darkest value;  (i.e. ‘shaded’ or shadowed areas);  as opposed to using the lightest value.  At times this almost approaches  being ‘white’, although white is almost NEVER used ‘straight from the tube’; for the lightest (or ‘highlighted’)  areas.

The photograph I used, was a square-shaped image that measured 3″ x 3″… whereas the canvas I was planning to use was a was an 18″ x 24″ rectangle.  I needed to alter how I oriented the image onto the new shape to compensate for the difference in size.   Translated into the same size square canvas, it would measure 24″ x 24″; so I had to compensate for the difference in height, without losing any of the components contained in the width… by instead, ‘adding’ elements of Becca’s clothing to the bottom; therefore increasing the painting’s overall composition.  A really good artist oil painting  starts with choosing the right kind of photo &  knowing whether it will translate into a carefully planned, well-executed and successful result.

Rather than only having grass as the painting’s background which appears in the photo behind Becca, I  ‘invented’ a completely different background; which included,  the sky, a tree; as well as a fence;  (found in my own backyard).  I used a pair of jeans as the inspiration for  adding an element which would give more interest to the bottom of the painting… since I felt it was lacking in the photograph’s composition.  A well-chosen/well-done background in a artist oil painting is an absolutely essential part of a successful painting.

Challenges In Creating A Great Composition:

One of the things that made doing this painting exciting for me, other than the fact that I was doing it for someone I knew; was that since I was just beginning as an oil painter, it gave me chance to try out new methods & techniques for doing the elements of an artist oil painting that I had never tried before.  The puppy’s fur was a challenge, since it required using different brush strokes to try to re-create the texture; and another wonderful yet unexpected benefit, was that I also made a surprising discovery while I was painting the rest of her.  Accentuating a certain element or elements; and exaggerating the detail by adding more contrast, (which was achieved by increasing the deeper & lighter values)… made her head appear to be projecting out of the canvas, creating a 3-dimensional effect.  I found that this was a desirable quality that I have utilized whenever possible, and I have made this technique a hallmark of my work.