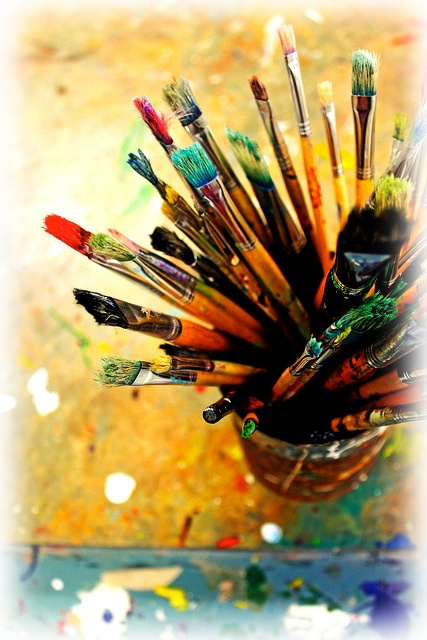 Getting back to oil painting after approximately a 10 year absence…

in many ways has felt like an awakening. First what I realized was that it was not unlike ‘riding a bike’, and once I sat down with my paints & brushes it began to feel like ‘home’ to me…however; there was a certain amount of trepidation as I pictured having to re-create my long-ago established ritual of placing the paint pigments in a particular order that I had once tuned to ‘perfection’. Amazingly, I was shocked & thrilled to discover that when I opened my paintbox; all the same pigments were still left in the exact order as I had used them the last time I had been painting… so long ago!

Since returning to painting…

I have had a chance to re-evaluate my techniques, not only with the brush strokes I am using to apply & blend each of the pigments I employ to create each element the way it exists in my mind…but also in the way in which I hold & manage my brushes. I need to have them ‘available’ yet I struggled at first to both, keep them within reach yet far enough away; as not to contaminate each with the other. The smaller studio space I find myself in now, compared with others I have inhabited before; possesses some constraints concerning where my materials are placed and how easily they are for me to access. This, in addition to rediscovering the painting methods  and techniques I had developed over time, has presented a real challenge for me. I am confident that with my determination to resume the journey I was on to realize my potential as an artist,  that I will adapt & be able to overcome any of these obstacles… as I attempt to recover the level of fluidity of motion I had previously come to enjoy.

In essence I have had to re-learn the techniques I had previously developed.

Color has, and remains…the component that excites me most as an artist.  In many ways color is the driving force, in creating the essence of the feeling and emotion that a painting evokes. For myself, it  is found in the process of interpreting each subject by using color to draw out an element’s form. How each one is affected by the color directly adjacent to it, as well as underneath it…will determine how color as a whole will relate to the entire painting .  I need to mention, that it is also important to consider the color that is already present on the canvas, when you are applying layers of color.  With previously added layers,  if you are painting using a wet-in-wet method,

In similar ways as with color, the way in which ‘value’ affects each object, (as well as the entire painting); is an essential element in giving the viewer the ability to distinguish shadows and highlights. (As well as all other levels of light and dark in between them). Value determines whether a particular element will stand out from another, and I must always pay careful attention to ensure that objects that are next to each other DO NOT become too close in value, or they will seem to ‘disappear’…essentially becoming one element. The act of ‘squinting’ during the process of painting helps me to better assess how each of the values relates to the others.

Adds a feeling of cohesiveness to a painting; and as I mentioned before, I need to pay a great deal of attention to them…particularly in how the colors and values will change when one or more colors merge. Obviously when colors are blended they are affected by one another and each will be influenced, and become darker or lighter, depending on which is more dominant in its intensity. I determine how to proceed by calculating the volume of paint to use, (i.e. the thickness of the pigment being added, to the one or ones that have previously been applied. How thick the pigments are, that I’ve already applied onto the canvas…and equally important; is how much medium I’ve added to them, will ultimately determine how they will interact with one another. This of course does not apply to paint that is already dry from earlier painting sessions.

Surprisingly, I found that re-acquiring this particular skill, was the one I struggled with most.  The brushes were the same I had always used…the paints and mediums weren’t any different, so I had to accept that it was I who had changed.  Time had adversely affected my eyes, and apparently to a certain extent, my dexterity…and I realized that had to learn to compensate for them, in order to return to the place where I had left off artistically.  What I determined was, that what the thing that affected these things, was actually rooted in how I was sitting in front of my easel. Some adjustments in distance as well as seat-height, were basically what were needed.

I use a non-toxic, odorless solvent to remove paint that has built-up on the brush during painting, in order to ensure that the pigments are at the purest level when I apply them. This is a very important step for avoiding a ‘muddy’ appearance to the painting, and takes some necessary attention on my part;  and requires that I discipline & force myself to do so…despite the interruption in my focus. Often while I’m painting I feel that I am transported to a ‘place’ that approaches the state of mind where time & place fade away; and having to be ‘practical’ becomes a distraction to the level of the flow of mental energy I have reached. The alternative would be to ignore the likelihood of tainting what could have been  be a pure, pristine harmony of pigments…compromising the results in both my satisfaction and quality of my painting.

I feel that the process of re-evaluation of my former techniques has been an asset for me, in rediscovering why oil painting has been and still is, the thing that drives me as an artist… and what fulfills, exhilarates as well as satisfies, my soul.