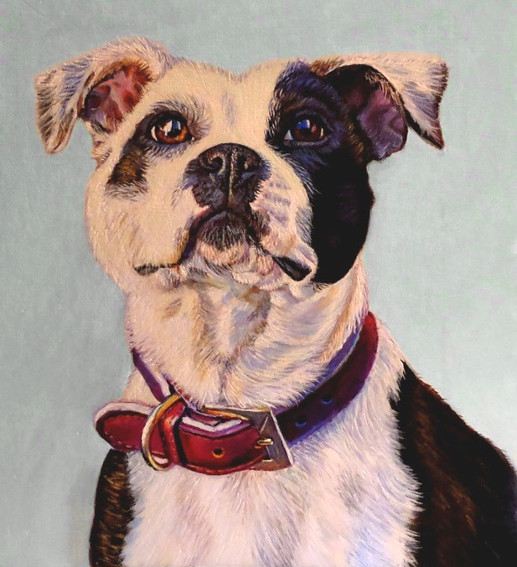 Painted in oils from a gorgeous reference photo by Shirley Davies on Paint My Photo…this is “Hara” the Pit Bull, (she is actually a Staffordshire Bull Terrier…one of several breeds that are often grouped together and called Pit Bulls). All the ‘white’ on Hara’s face, neck, and chest gave me the chance to add lots of cooler blues and purples, against the warmer yellow and reddish tones. The highlights in the deep brown on one side of her face had a bluish hue, which I used a bright pigment called cobalt blue to draw it out…whereas the fur on her shoulders being ‘brindle’, was achieved by using a mix of dark brown with reddish and yellow highlights.

Unfortunately, Staffordshire Bull Terriers, along with several other breeds, such as the American Pit Bull Terrier are being unfairly categorized as dangerous and vicious dogs… BSL (Breed Specific Legislation) has been introduced in some cities and states in this country, such as Denver, CO; where owning and keeping one as a pet is illegal. This is the case in approximately 12 other countries besides the USA. In many cases, family pets like Hara, with absolutely no history of aggression, are being removed from their homes; and taken to shelters. Often, since there are not enough adoptive or foster homes, they are even being euthanized.

There are many recent studies that show that these dogs make extremely loyal pets and companions, and when given temperament testing Pit Bulls score higher than many so-called ‘safer’ breeds. According to the American Temperament Test Society, 804 American Pit Bull Terriers were recently tested and 695 passed. Which means that 86.4% of Pit Bulls tested by the ATTS had a good temperament. The Pit Bull pass rating was above 121 other breeds of dogs, including Golden Retrievers. The only exception was the Labrador Retriever, who scored 92.4%.

I feel that these dogs are absolutely being unfairly targeted and malaligned by those, who out of ignorance that stems from being misinformed…especially by the media who has focused their attention on stories which are exaggerated and out of proportion. Stories about individuals who have raised their dogs to participate in the cruel sport of dog fighting, that many times results in the serious injury of the dogs, at times fatally… instead of reporting what are the much more prevalent stories about how loving, loyal, and heroic family members these dogs really are. I myself am a proud owner of “Bryn”…an American Pit Bull Terrier, our newest furry family member. On a sad note, unfortunately; we just lost our 11 yr. old Pit Bull/Lab mix; “Missy”, to cancer.